After nearly 4 years of dedication to fuel cell systems, HEATSTACK has successfully concluded. The project’s overall objective was reducing the cost of the fuel cell stack and heat exchanger – the 2 most expensive components within a fuel cell system – which together represent the majority of total system manufacturing costs.

So, why fuel cells? Onsite generation of electricity and heat has had affordability issues and as recently as 2017 only a fifth of European household energy consumption was from renewables. Fuel cells have shown great promise for use in residential micro-Combined Heat and Power (mCHP) generation due to high electrical efficiency and ability to run on conventional heating gases. Fuel cell systems mitigate the detrimental effects of using natural gas, for example by reducing emissions. Hybrid systems, like the one developed in HEATSTACK, can also use hydrogen – a clean energy source – where the infrastructure is available. This all means fuel cell systems can be affordable, cleaner and efficient when compared to conventional systems.

How did HEATSTACK do this? By using 2 key approaches: improving the manufacturing processes to increase quality and reduce the time to manufacture, and improving durability such that the mCHP system as a whole has a longer life.

Development of the heat exchanger was led by project coordinator Senior Flexonics UK, who created a production-ready cathode air pre-heater (CAPH) design using AluChrom 318 – a novel material investigated the University of Birmingham – that gives robustness, cost effectiveness and industry-leading low levels of chromium leakage. The University’s research showed AluChrom 318 has improved chromium leakage rates when compared to all other materials after just 150 hours. The University of Birmingham also investigated a pre-heat treatment for material optimisation. Senior’s CAPH has a contra flow design, works up to 1000⁰C and proven effectiveness of over 90%! Senior Flexonics tested their new heat exchanger in Italy with ICI Caldaie, who used the widest range of conditions to perform a thorough evaluation. 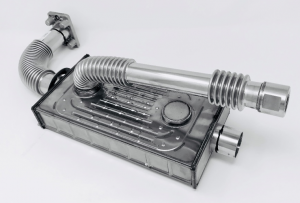 Several manufacturing challenges from using AluChrom 318 were overcome, including improving laser welding consistency and quality. Significant investment was also made in equipment and tooling for process efficiency. This has resulted CAPH manufacturing using the new processes with the cycle time reduced by over two thirds and a cost reduction of over 50%! The new tooling and equipment were transferred, installed and recommissioned at Senior’s manufacturing site in the Czech Republic ready for production volumes. 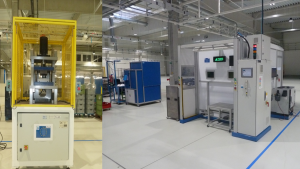 Development of the fuel cell stack was led by Sunfire GmbH of Germany. Sunfire undertook a detailed process study to identify the optimum process automation. Printing of the glass seals using a two-step stencil process was chosen as the method with the best value for industrial stack production, with production process development including laser measurement. This resulted in a 10% cost saving for the stack.

Sunfire used system knowledge and technology from another German partner, Vaillant, to integrate their optimized Solid Oxide Cell (SOC) stack with the Senior Flexonics CAPH in full systems. Intensive testing and product verification were conducted, including long-term stability of the SOC stack. AluChrom 318 reduces contamination and a stack should last 15% longer until a replacement is needed. Further performance tests showed these technologies are ready for use in series production of Sunfire-Home units.

HEATSTACK represents a key step towards achieving commercial cost targets for fuel cell mCHP appliances. The project was widely disseminated, with a range of content in our Public Materials.